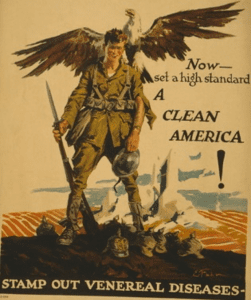 HMS Librarian Jennifer Miglus is featured in the podcast, Grating the Nutmeg Episode 58: Keeping It Clean in World War I.

In the 1910s, a group of Connecticut reformers formed a society aimed at solving a growing crisis – the spread of venereal diseases. The United States’ entry into WWI provided this so-called “social hygienist” movement with an unprecedented opportunity to influence the sexual mores of Americans. In this episode produced by Connecticut Historical Society’s Natalie Belanger, she tells us how that worked out for these well-intentioned reformers—especially one George P. Thayer, a crusader for clean living that saw a little more in France than he’d bargained for.

Listen to this podcast here.