Take a trip to the 19th century with famous Connecticut native and discoverer of anesthesia, Horace Wells, in a self-guided walking tour through Hartford. By visiting various landmarks in the city, we invite you to explore the brilliant yet tragic life of Horace Wells and the rich history of medicine on which he left an indelible mark.

Who Was Horace Wells? 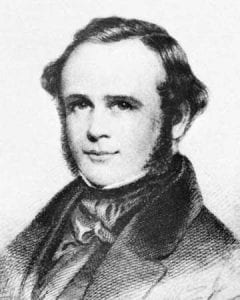 Born in January 1815 in Hartford, Vermont, Horace Wells relocated to Hartford, Connecticut, in 1836 to practice dentistry. In addition to building a successful practice that tended to the governor and his family, Wells shared his education by writing textbooks and pushing his field forward with patented inventions.

The majority of his practice involved extracting teeth, a procedure he disliked because of the obvious discomfort it caused his patients. That was until December 10, 1844, when he realized there was a better way. While attending a “Grand Exhibition of the Effects Produced by Inhaling Nitrous Oxide,” Wells noticed that those who inhaled the gas would often injure themselves without any indication of pain. Wells asked G. Q. Colton, the showrunner, afterward, “Why cannot a man have a tooth extracted and not feel it under the effects of the gas…I believe it can be done!”

The next day, after receiving a bag of gas from Colton, Wells had his colleague, John Riggs, administer the gas and extract one of Wells teeth. He felt no pain, and dentistry was changed forever. However, Wells would not receive the accolades that he deserved during his lifetime.

In January 1845, while showcasing the effects of nitrous oxide at the Massachusetts General Hospital in Boston, the student cried out, despite feeling no pain. Because of this prank, the demonstration was considered a failure, discrediting Wells. After falling into depression and developing a chloroform habit, Wells gave up his practice in April 1845.

He traveled to Europe to present his claim to the French Academy of Sciences, the Academy of Medicine, and the Parisian Medical Society in 1846. Two years later, they would vote that “to Horace Wells of Hartford, USA, is due all the honors of having first discovered and successfully applied the uses of vapors or gases, whereby surgical operations could be performed without pain.” In addition, they elected him an honorary member of the Society and awarded him an honorary medical degree.

Sadly, Wells would not hear the news as he had already taken his own life. While he may ultimately have been a tragic figure, HMS remembers his brilliance, creative thinking, and life’s work.

Horace Wells changed the future of dentistry and helped highlight the importance of Hartford’s influence on all areas of medicine in the 1800s. Now you can explore his life as well as his legacy through the eyes of family, friends, and other Hartford residents with our exciting walking tour. Locations include: 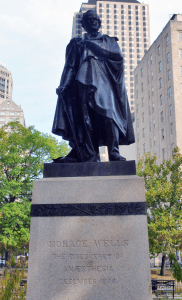 This statue is the first public park statue in the United States. Its funding came from the successful lobbying efforts of Hartford dentist James McManus, Hartford physician and founding HMS member Ebenezer Kingsbury Hunt, and Dr. Henry P. Stearns. They received $5,000 each from the state of Connecticut and city of Hartford to build the statue. It was sculpted by Truman Howe Bartlett and cast in Paris by the Gruet Foundry in 1874. The State Dental Association bought the granite base. The face of the statue was created by a death mask created by a student of Wells, John Riggs. Riggs was Mark Twain’s dentist. It was unveiled and dedicated on July 22, 1875. The base is inscribed: Horace Wells, the Discoverer of Anaesthesia. December 1844. 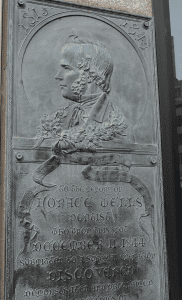 Created by Enoch S. Woods, this bronze plaque sits across the street from the Old State House at the primary office location of Dr. Horace Wells’ dentistry practice, originally 180 ½ Main Street. This is where Dr. Wells’ own molar was removed without feeling pain due to the use of nitrous oxide.

It shows a profile of Wells with the inscription, “To the memory of Horace Wells Dentist who upon this spot DECEMBER 11 1844 submitted to a surgical operation DISCOVERED demonstrated and proclaimed the blessings of ANESTHESIA.”

A ribbon drapes the formal inscription and has its own message: “This tablet commemorating the 50th anniversary is placed by 250 dentists.” 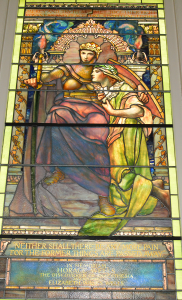 Horace Wells and his wife Elizabeth were members of Center Church in Hartford. His son, Charles T. Wells, continued to be very active in the parish. The Wells’ family pew was across from the beautiful stained glass window that is there today. Tiffany was commissioned to create the work of art by Charles Wells to honor his parents. As one of five Tiffany-designed windows, it is also known by the title, “Righteousness and Peace.” The inscription on the bottom of the window image reads, “Neither shall there be any more pain for the former things are passed away.” The formal dedication at the base says, “In memoriam Horace Wells the Discoverer of Anesthesia and his wife Elizabeth Wales Wells.”

On the 150th Anniversary of the discovery of anesthesia in 1994, the Horace Wells Club restored the window. 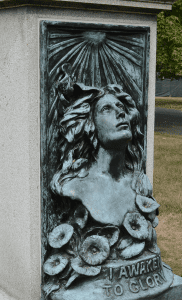 Horace, Elizabeth, and Charles Wells are all buried at Cedar Hill Cemetery today. However, when Horace Wells died, he was buried in Hartford’s Old North Cemetery. In 1906, Charles exhumed his parents and moved them to Cedar Hill where he had commissioned Lewis Potter to create a stirring and unique monument for them. It is thought that the patient’s face shown in pain awaiting the arrival of the angel is modeled after Horace Wells. Angels on the side have the phrase, “I Sleep to Awaken,” and the other side states, “I Awake to Glory.” In 2004, several groups including, the Hartford Medical Society, joined together to raise $55,000 to have it restored, replacing the angels that had been stolen in the 1980s.

The beautiful Trinity College Chapel memorializes Hartford’s notables at the end of their pews. The Horace Wells pew carving was presented to the college by Dr. Frederick T. Murless, Jr., President of the Horace Wells Club. It was carved by J. G. Wiggins in a Gothic architectural style. It features his profile with the years of his birth and death. At the top, a three-dimensional carved finial depicts Aesculapius, the Roman God of medicine and healing. The armrest has a figure of the patron saint of dentistry, St. Apollonia.

A life-sized, post-humous portrait of Horace Wells was a gift to the Wadsworth Atheneum by the renowned portrait artist, Charles Noel Flagg. Flagg modeled the portrait after a daguerreotype and full-length silhouette of Wells, both of which were reputed to have been created by Wells himself.

The Connecticut Historical Society is now the home of the Horace Wells collection, with 15 items gifted from the Hartford Dental Society and the Hartford Medical Society. There they have several pictures and the bronze death mask of Horace Wells made by Leonard Craske in 1940 after a work by Dr. John Mankey Riggs.

Although history may not change, we can always learn something new from it. Our walking tour makes these lessons more engaging, making you a part of our history! After all, as you learn and share fun stories and biographies, you help keep the past and its traditions alive.